Charged: A History of Batteries and Lessons for a Clean Energy Future by James Morton Turner

An important shift is under way in environmental politics. As Jesse Jenkins of Princeton University argues, 20th-century environmentalism emerged as part of “an anti-modern effort to counter the (frequently egregious) excesses of America’s period of modern infrastructure building from the New Deal to the 1970s.”1 For a long time the movement was associated with saying “no” to stuff. Campaigners laid down in front of bulldozers or protested at planning meetings -- or argued that the world needed to rethink consumerism, curb consumption and rein in global capitalism.

Now that is changing. Among many sustainability advocates, there is a growing recognition that you cannot simply say “no”; you need to build things in order to ensure a just transition to a net-zero world. This means building or retrofitting net-zero housing and office buildings, as well as putting up wind and solar farms and public transportation.2 This comes at a cost: buildings might be taller; cities might be denser; and people’s lives might be disrupted by construction work. You might even destroy some fields or farmland. But as Jenkins says, “you can’t actually build a clean economy by standing in front of bulldozers.”

What some are calling “material environmentalism” is increasingly informing policy. Just look at America’s Inflation Reduction Act, which offers huge support to clean energy and transportation.3 In France, Emmanuel Macron is going big on building wind farms.4 It is also an important theme of James Morton Turner’s new book, “Charged.” The book advertises itself as a history of batteries. It is that, but in addition it makes some hard-hitting points about sustainability politics. 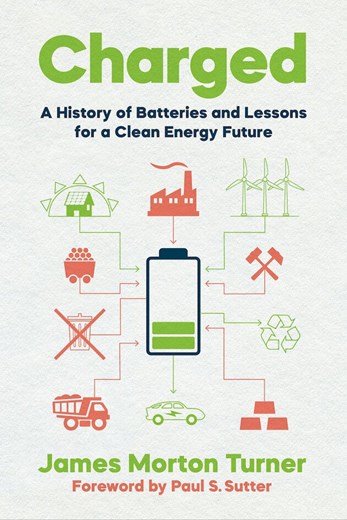 Few people pay much attention to batteries. They do not capture the public imagination in the same way as, say, oil or the Intergovernmental Panel on Climate Change. Yet, as Turner shows, they have a fascinating history -- and they have a crucial role to play in moving us towards a net-zero world, whether by powering electric cars or backing up renewable-energy sources.

The first cars relied on batteries. “Before the electric starter motor became common in the 1910s,” Turner says, “disposable dry-cell batteries helped to start and, in some cases, run early gasoline cars.” He has done an impressive amount of research on the early automobile industry. “Until the 1910s, there were as many electric cars on the road as gasoline cars,” he reveals.

In addition, Turner shows that batteries played a crucial role in the rise of the radio. They were also in the first telephones. Without a national grid, phones needed to be powered some other way. The power source was located on the telephone itself. “Twenty-first century smartphone users have something in common with the very earliest of telephone users,” he points out: “each fretted about their batteries.”

Over time batteries have become more efficient. From 1995 to 2010 the energy capacity of a 18650 cell tripled, for instance, the result of tweaks to battery chemistry and engineering advancements. At the same time batteries have become more sophisticated, relying on a wider range of raw materials. Compared with lead-acid batteries or single-use zinc-carbon batteries, Turner shows, lithium-ion batteries depend upon an array of cathodes, using a great variety of elements.

The battery industry has flaws. Like with fossil fuels, the business of sourcing and manufacturing materials for batteries can be a grim one.5 The countries which help supply the world with materials for batteries are often poor, corrupt and violent. Just consider the case of cobalt, an important constituent of lithium-ion batteries. “In 2009 children made up approximately half of the workers engaged in artisanal cobalt mining in the Democratic Republic of the Congo,” Turner finds. Mining can cause untold environmental destruction. Nickel extraction in and around Norilsk, in northern Russia, has “left behind a wasteland scorched by sulphur pollution.”

The history of batteries is, therefore, challenging. After reading it, you may well wonder whether batteries are indeed the future. Are they even sustainable? One hope is that circular-economy strategies, including recycling, will be enough, allowing the world to use more batteries without relying on more extraction. Turner disagrees. “No amount of recycling can meet the material demands of a clean-energy future -- there is not nearly enough nickel, graphite, lithium or other materials in circulation and ready to be recycled.” Another solution is needed.

The only option, says Turner, is the expansion of supply. We need, he says, to build more mines and extract more metals from the ground. Countries such as the United States must “expand mining and materials processing [domestically] in support of a transition to a clean-energy future.” This is a striking, and unusual, form of environmentalism. You won’t see many people in Extinction Rebellion arguing in favour of more mining. But as Turner sees it, there is little alternative.

The great challenge, therefore, is to make sure that the business of making and distributing batteries is as sustainable as it can be. Global investors are paying more attention than ever before to deforestation6; they might also look more closely at battery supply chains. This means knowing where raw materials come from, and who is extracting them. It means knowing that people are paid fairly for their work and ensuring that the local environmental damage caused by extraction is minimised. Turner’s “material environmentalism” speaks some hard truths about what may need to happen to create a net-zero world. It will not be easy.

The information presented herein is intended to reflect Generation’s present thoughts on sustainable investment and related topics and should not be construed as investment research, advice or the making of any recommendation in respect of any particular company. It is not marketing material or a financial promotion. Certain companies may be referenced as illustrative of a particular field of economic endeavour and will not have been subject to Generation’s investment process. References to any companies must not be construed as a recommendation to buy or sell securities of such companies. To the extent such companies are investments undertaken by Generation, they will form part of a broader portfolio of companies and are discussed solely to be illustrative of Generation’s broader investment thesis. There is no warranty investment in these companies have been profitable or will be profitable. While the data is from sources Generation believes to be reliable, Generation makes no representation as to the completeness or accuracy of the data. We shall not be responsible for amending, correcting, or updating any information or opinions contained herein, and we accept no liability for loss arising from the use of the material.